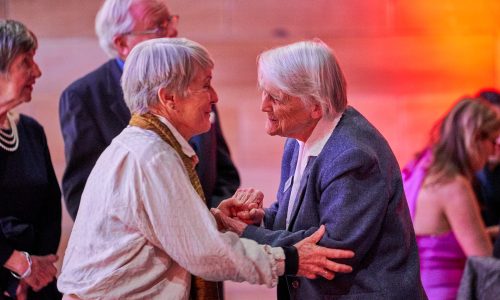 The whole community of Sancta Sophia College warmly congratulates Sister Mary Shanahan RSCJ OAM, who has been recognised for her immense contribution to society with a Medal (OAM) of the Order of Australia in the Queen’s Birthday Honours List 2019.

Sr Shan is awarded the Medal for her service to tertiary education, and as a mentor of young students. Her connection with Sancta Sophia College extends over 60 years:

Capturing what Sr Shanahan means to our Sancta community, a former student Elizabeth Hannan said the following at the celebration of Sr Shan’s 90th birthday:

“She is lion-hearted, though small in stature…The Shan we love understands that young people can be thoughtless and self-absorbed – and she forgives us, though we aren’t so young anymore. She is gentle, and humble, and funny, and so wise. Above all, she has grace – and, for many of us, she is as close to God on this earth as we have ever felt.”

Sr Shanahan has had a distinguished career as a member of the Society of the Sacred Heart:

Sr Shan is also recognised for her time at Stuartholme: