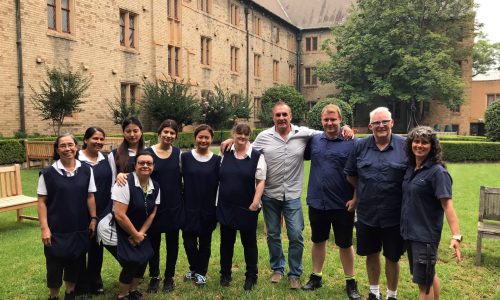 A Heartfelt Thanks and Farewell to Terry Nixon

Sancta is blessed with a wonderful staff team that works tirelessly to deliver the best possible student experience.

Nearly every resident and staff member who has spent time at Sancta in the past 24 years would recognise Terry Nixon. Since 1996, Terry has been Sancta’s Facilities Manager, taking absolute pride in his role to maintain our beautiful grounds and facilities. Our beautiful Quadrangle garden that is the most cherished space by Sancta alumni – without Terry’s passion for its perfection, it may not still be in its prime some 94 years after its establishment. Terry has carried Sancta through many periods of capital works, including the establishment of Graduate House in 2014.

More recently in 2018, he was pivotal in supporting the College through an upgrade to our fire safety infrastructure which involved many months of hard work and red tape. Together with his Maintenance and Housekeeping teams, Terry has ensured cleanliness and serenity for our residents and guests.

We will always remember Terry for his exceptional management skills, teamed with genuine kindness and compassion.

The College community wishes Terry all the best in his future endeavours.