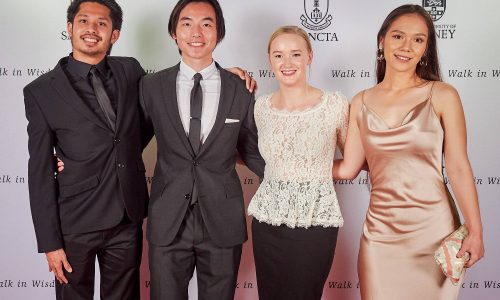 Degree: Master of Science in Medicine (Clinical Epidemiology), The University of Sydney

Road to Sydney
The University of Sydney’s School of Public Health is renowned in South East Asia for providing expert guidance to clinicians across the region to improve their skills in research methodology and evidence-based clinical care. As a young researcher, I jumped at the opportunity to learn these skills from the very same experts at The University of Sydney.

Road to Sancta
I chose Sancta because I knew that, with a compressed Master of Science programme, I wanted to have a holistic experience in Sydney. I was drawn to Sancta’s large postgraduate community after reading about it online. The on-site interview sealed the deal as I could see myself becoming part of the vibrant and energetic community at Sancta. And I haven’t looked back since.

Differences between life in Singapore and Australia
It is expensive eating out! But that is an incredible opportunity to practice your culinary skills with other like-minded adventurous residents in the Rooftop kitchen as a change from the Dining Hall. From dumpling-making to bubble-tea workshops, you’ll learn that it is much more fun preparing and enjoying meals together with your neighbours.

While Sydney is great, be sure to travel up and down Australia to enjoy the amazing sights, wildlife and make new friends across the states. It is an absolute blast packing all you’ll need for a 3-day weekend in a rucksack and jump on a bus or rent a car to travel along the coast and enjoy the beauty of Australia.

Best things about Sydney
Without a doubt, it was the opportunity to become part of an incredible community at Sancta. I still remember how I felt on my first dinner, having just flown in and trying to learn more about each person until some of the guys spontaneously decided to do a gathering on the rooftop, leading to a night stretching into the early morning and the start of an epic adventure.

In addition to the amazing friendships, it was the opportunity to help others reach their personal bests, whether it was completing a first half-marathon to helping to bring Halloween to Sancta for the first time with an epic haunted house.

Best things about Sancta
The community! Beyond just being friends and amazing neighbours, we had the opportunity to create an incredibly strong identity together, where everybody could gather like-minded individuals.

From the running club to the 6.30am gym gang and the Friday night board game crew, it was amazing forming so many communities and fellowships, united together as the Sancta family.

And without a doubt, the opportunity to help plan and execute some of the epic ‘big-ticket’ events and parties, from introducing Halloween to Sancta with a viral video campaign and a haunted house to being one of the ‘go-to-gang’ for the many parties and bonding events throughout the year.

Standout memories of Sancta
Too many to count! The best memories were helping other residents become better persons and enabling them break out their comfort zone.

One memory that sticks out was kick-starting the running club of 2019, with one of the original members threatening to “kill me if she could catch up”. But over time, they got the running bug and are now smashing through 10Ks and half-marathons!

How did you get involved in the community?
It happened entirely by accident! I was having my first meal in the Dining Hall, jet-lagged and exhausted having done up my luggage and room and not knowing anybody in the small group of early-arrival residents. Suddenly, one of them asked who wanted to run in the morning. Before I knew it, I volunteered to lead him on an 8K run. At 5.30am. After an epic rooftop session that ended past midnight!

But that was the key trigger – realising that above all, what made the difference was a community of support, openness, and willingness to try novel ideas “for the hell of it”. And that just kept the ball rolling. I became the welcoming guy to each new resident as they arrived and one of the community ringleaders because I was so welcomed by this same community and wanted to do the same for the others too.

What was the hardest adjustment you had to make?
I haven’t had fixed mealtimes since undergraduate halls life in 2008! So it was relearning to adapt my schedule around the mealtimes in the Dining Hall.

Initially, I aimed to live off Clif Bars and fruit for lunch, only returning back from university for dinner but I’ll be honest, it didn’t last long when I realised what I was missing out on the quality of meals. It became a habit of making “The sprint” from gym/lectures/library/tutorial/studies/Blackwattle Bay to the Dining Hall to get back in time.

Advice for future international students
Have an open mind, be adventurous, go outside your comfort zone. Don’t look back at this opportunity to be one of regret, of “things I should have done”. Instead, have a mental catalogue of the wild adventures you’ve had that made you a much stronger, better and independent person.

If a tourist had 24 hours in your home city of Singapore, what tips would you give them?
Sleep on the plane! The amazing thing living in a country that you can get from one end to another in 3hrs is that there is a chance to see much more than the air-conditioned malls and tourist traps – such as Singapore’s OG theme park, Haw Par Villa. Designed as a representation of scenes from Chines mythology, the depictions of hell give Disneyland a run for its money.

And if you’re up to really get off the beaten track, reserve at least 4hrs to go offshore to Pulau Ubin, accessible from Changi Point ferry, close to the airport. With minimal urban development, it’s a chance to get close to an incredible range of wildlife in the mangrove swamps and jungle.

Moving forward from Sancta
I am currently employing all the skills I have learnt in my Master of Science in Medicine, preparing for my eventual PhD. I have no idea where it will be yet, but I am already looking forward to the next chapter of a new adventure!

Homesickness, culture shock and anxiety are common experiences for many international students. How did you manage this aspect of your experience?
Remember, you are not alone in adjusting to a new culture. You are going to be surrounded by dozens of other new residents getting used to life Down Under. Make new friends, both in Sancta and outside, learn more about each other and their culture and before you know it, you won’t be homesick anymore as you’ve made this community your new home.

If you could sum up Sancta in a few words, what would you say?
Open, innovative, fun!

Message for the Sancta community
A community is more than something established by leadership. We each need to play a part to make it home. Don’t go forth asking “how do I benefit from…”, but instead ask “this is my home too. How can I make it better for all of us?”