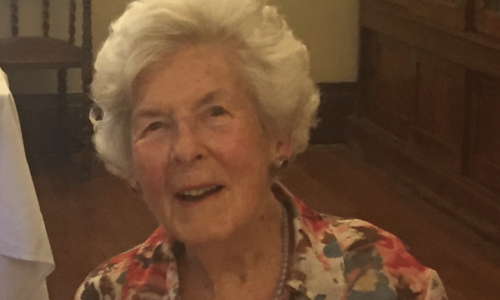 It is with deep sadness that we advise of the passing of Patricia (Trish) Horsley on 28 January 2021.

Trish Horsley, for all those who knew her, was an incredibly intelligent, engaging and joyous woman who made everyone feel valued and interesting. She was the embodiment of Sancta – a woman who wanted to see others succeed and who shared her gifts and wisdom for the greater good. This sentiment is shared amongst the Sancta staff and scholars who had the honour of being connected to her recently and further in the past.

Trish attended Sancta from 1948 – 1953 whilst studying a Bachelor of Architecture at The University of Sydney and has remained invested in and connected to Sancta ever since. Her sister, Mary Burns also attended Sancta.

Since her time as a resident, Trish has remained intrinsically connected to the Sancta Sophia College community. As a member of Council for 41 years, she played a key role in several major projects such as the construction of Sancta’s Octagon building and the Vice Principal’s apartment. A great supporter of history and the arts, she also made a valuable contribution to the management of the College’s library, archives and treasures, and organised several significant art exhibitions. Most notable of these was “The Broad Canvas, Art in Australia 1770 – 1967”, held in 1967.

Importantly, she has been one of Sancta’s most generous donors, with the ‘Patricia Horsley Postgraduate Leadership Scholarship’ gifting the Sancta experience to two students annually for the past 7 years. The impact of Trish’s generosity on these students has been profound and long-lasting.

“Conversations with Trish about her scholars weren’t complete without a charming story relating to her time at Sancta, or certain periods of Sancta’s development that she had been involved in. Right up until our last conversation, Trish was sharp and abundant with humour and curiosity. It was an honour to get to know Trish in her final years and I look forward to sharing her story with future donors and scholars.”

“I’d like to share my gratitude towards her support for many of us at Sancta. I remember the attentiveness she paid towards each of us when we conversed with her, and how much she truly cared about the lives of her scholars. Her generous contributions towards the next generation of students spoke volumes of her beautiful character.”

“Trish’s immense generosity helped me to remain at Sancta for the last two years of my study of law, which ultimately had a lasting and profound impact on my development which myself and my parents will forever be grateful for. I was also grateful to be able to visit her at her home in Rose Bay during my time at Sancta to thank her personally.”

“I only met Trish for the first time in 2018, but quickly came to admire the wonderful relationship she had with her scholars, who adored and admired her. She was a special woman. Inspiring, funny, sweet and loving. Long will her memory live at Sancta.”

“Patricia Horsley was the embodiment of the Sancta Spirit and the College was privileged to have been influenced by Patricia long before any current resident could recall. The values of compassion, unconditional kindness and generosity are integral to the Sancta community. These are the very values which Patricia instilled during her time at Sancta, and very much the same values which she actively upheld throughout her entire life. On a more personable note, it was an absolute pleasure to have heard about Patricia’s “shenanigans” from her time in the Sancta halls, and equally to hear that nothing seems to have changed all these years on. These halls are still the same home to all of us as it was to Patricia. The Sancta community has lost one of its greatest, but her legacy will forever serve as an inspiration for those to come.”