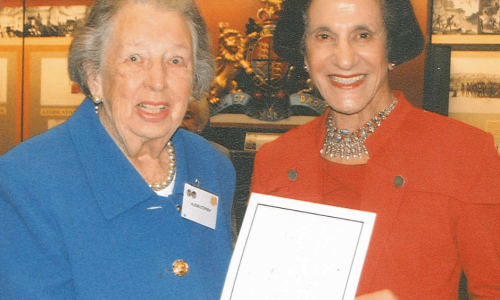 Alison Stephen achieved incredible things in her career as a public servant and was a generous donor to Sancta’s scholarships program for many decades.

The Sancta Sophia College community is saddened by the news of the passing of alumna, Alison Stephen, in July 2020, and we express our deepest sympathies to those who were close to Alison.

A boarder at Rose Bay where she was Head Girl in 1938 (and recipient of the Award for Excellence in Studies in 1937 and 1938), Alison attended The University of Sydney in 1939. She was enrolled in the Arts Faculty where she studied History, English, Latin and Psychology. She graduated with distinction with a pass Arts degree in 1942. While at the university, Alison was a student at Sancta Sophia College which at that time was still administered by the Sacré Coeur nuns. As she says there were quite a few ex-Rose Bay students, so it was a happy and familiar background. College life was very pleasant where the students mixed easily with the men’s Colleges and shared tutorials as well as entertainments such as dances and sporting events.

On graduation, Alison was employed by Australian Wireless Association (AWA) where she was in charge of the statistical evaluation of wireless parts. She then worked at the Ministry of Munitions where she was engaged in keeping the statistics of the movement of vehicle parts. Because she had a degree in Psychology she was then commandeered to work in the Federal Manpower Directorate.

Towards the end of the War, Alison was involved in planning and in setting up the Commonwealth Employment Service (CES) which eventually became part of the existing Department of Labour and National Service. During this time, Alison became an Assistant Secretary of the Department, a senior position within the Public Service. The appointment of women to this rank at that time was unusual and Alison was one of the first women to achieve this rank.

Through this organisation, policies and standards relating to labour conditions were drawn up and Conventions which hopefully would be adopted (ratified) by members countries and subject to inspection and confirmation by the ILO. In her capacity as Head of the International Branch of her Department, Alison travelled to Geneva 2-3 times a year and on occasions chaired meetings and addressed plenary sessions.

In 1960, after the referendum which gave the Aboriginal people the right to vote, Sir Henry put Alison in charge of Aboriginal Employment in Australia, a position she held for 3-4 years. Her aim was to improve the education of the Aboriginal population and employment opportunities.

By 1973, Alison was again involved in international employment policy direction until her retirement in 1981. She was one of the first women to chair international meetings at the United Nations in Geneva. During this latter period of her career, she was tasked with promoting the policies that had been developed in Geneva in Australia.

Alison resided at Sancta during her degree and is remembered with a room on Ground Floor Sheldon (West) Wing. She received a Sancta Alumni Award for Professional Achievement in 2013 and has an entry in 90 Notable Alumni and Friends.