Five Questions is a podcast initiative by Sancta’s Academic Heads.

It is a conversation with different professionals to get an insight into how they started in their career and what it’s really like in their line of work. You’ll be surprised how much you can discover with just “five questions”. 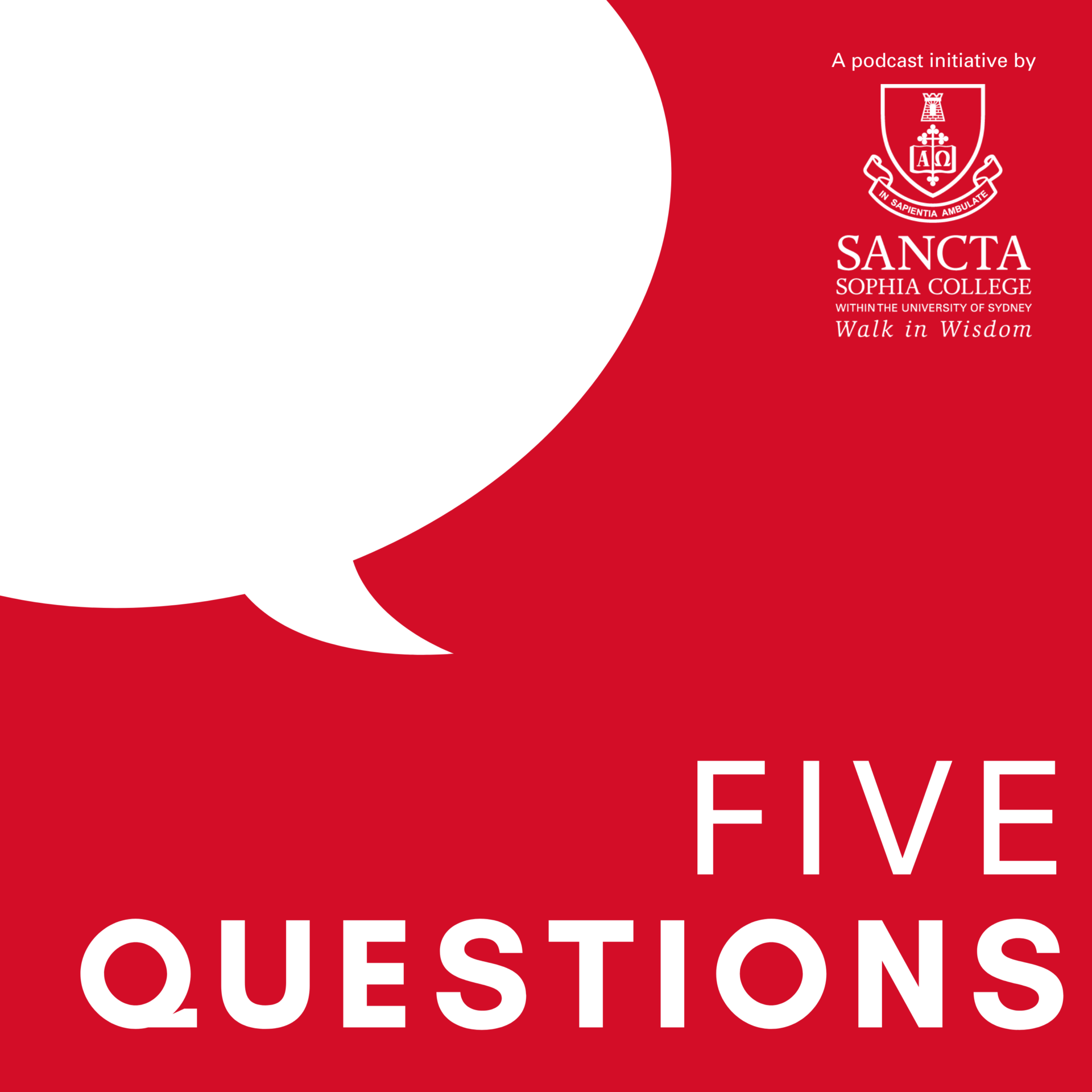 While residing at Sancta in the 1980s, Brigid completed her Bachelor of Arts degree majoring in Education, Religion Studies and Sociology. After further studies in Adelaide, she spent most of the next 30 years as a classroom teacher, administrator and leader in Catholic, State or Independent primary and secondary schools in metropolitan and regional NSW and SA.

Taking up the opportunity to study and diversify has led her into development and delivery of Vocational Education Training courses, Secondary Religious Studies and Service Learning programs. Not long before taking up her role as Vice Principal at Sancta in 2018, she completed a Masters of Educational Leadership.

Brigid currently lives at Sancta with her husband John and their dog Lewis.

Dom is known as one of Australia’s best drummers and has worked with Sony Music Australia, Warner Music Australia and Universal Music Australia. He regularly appears on TV shows and featured events, including The X-Factor, The Voice, and the ARIA Awards.

Dom completed a Bachelor of Contemporary Music Performance at The Australian Institute of Music. He is a UNSW educator and also teaches private lessons.

Episode 3: Five Questions with a Veterinarian

Dr Cheryl Chan has worked in the veterinary industry for a number of years and has experienced a true breadth of roles. Notably, she has held positions in veterinary nursing at referral hospitals including Landon Veterinary Specialists in Singapore and the Veterinary Specialists of Sydney in the Sutherland Shire. She has also previously worked as a Conservation Ambassador at Singapore Zoo and diversified into research as an assistant at the AVA Agri-Food & Veterinary Authority of Singapore.

Cheryl completed her Bachelor of Veterinary Biology and Doctor of Veterinary Medicine degree at the University of Sydney in 2020. She currently works as a general practice small animal veterinarian at Vets on Crown in Surry Hills.

Dr Ken Ho has studied a broad range of specialised branches of dentistry and medicine at universities and institutions around Australia, Asia, Europe, and the USA. He has owned and managed his group of dental practices in Sydney, Canberra and Newcastle for over 30 years. He has extensive training in the field of cosmetic dentistry, orthodontics, dental implants and full mouth rehabilitation.

Ken particularly enjoys mentoring and coaching younger dentists and has a high value for chasing mastery through the understanding of the ‘student mind’. He currently resides in Sydney and outside of work, Ken is an experienced pilot, pursues any outdoor activity and spends all his free time with his two children.

Kevin Bourke is a Chemical Engineer who is currently working on the design and construction of the Port Kembla Gas Terminal as their Instrument, Control and Electrical (ICE) Engineer.

Kevin was initially lucky enough to be awarded a cadetship in chemical engineering by CSR Ltd when he left school. With CSR, he worked in the sugar industry while completing his undergraduate degree. Upon graduation, he joined Caltex at their Kurnell Oil Refinery in Sydney where he soon began to specialise in automation and process control.

In the 1990s, he worked at the ICI (Imperial Chemical Industries) at Botany Industrial Park in petrochemicals (this site is now run by Qenos), before returning to Caltex as their Process Control Superintendent in 1999. When the refinery closed in 2014, Kevin became the Automation Team Lead for Chevron’s Gorgon LNG plant in Western Australia where his team commissioned Australia’s largest LNG plant including the world’s largest carbon sequestration facility.

Julie Baird has over 30 years of professional experience in the museum sector. She began working in Canadian museums in the 1990s focusing on textile collections of medium to large regional museums. Ms Baird returned to Australia and joined the National Motor Museum in South Australia in 1998. Since 2002 she has been at Newcastle Museum and was part of the small team who moved and redeveloped the museum which re-opened in its new site in 2011. She is now the Director of Newcastle Museum.

The intersection of innovation and accessibility has been a strong theme in Ms Baird’s major contributions to the museum sector. Ms Baird’s experience in researching and interpreting and working with community has also resulted in a number of successful and award-winning permanent exhibitions, including the redesign and redevelopment of the Newcastle Museum’s social history galleries.

Her career focus has been to spread knowledge about history and museums in unusual or popularised forums, working with communities as broad as embroidery guilds and TV audiences to female prisoners and bikie clubs. Julie sits on the Artform Assessment Board Museums and History for Create NSW, has been a standards assessor for Museums & Galleries NSW and is the current Vice President of the Australian Museums & Art Galleries Association.

We’re always looking for professionals to interview. If you’re interested in featuring on our podcast, we’ve got Five Questions for you! Please contact us to join our pool of guests.

Five Questions is recorded on the land of the Gadigal People of the Eora Nation, and we pay our respects to Elders past and present. We acknowledge the Country you are joining us from and pay our respects to any Aboriginal or Torres Strait Islander People who are listening.