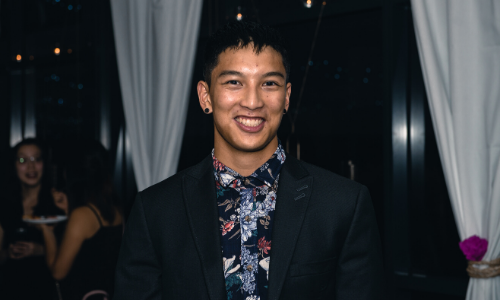 Mitchell Tung was invited, as the 2019 Sancta Postgraduate Social Representative, to address a large audience of newly arrived international students at Sancta’s Welcome to Sydney event hosted in collaboration with The University of Sydney.

The below is an excerpt from his speech.

It’s not easy to move away from home.

We all have our different definitions of ‘home’ – the house you lived in, the streets you played on, the people you grew up with.

I’m from Canada–more specifically, Calgary. We hosted the Olympics once… I think. People outside of Canada don’t know it very well and from a global perspective it’s a pretty inconsequential city, but it’s where I call home.

When I think of Calgary, I think of three places. There was this one playground just outside my backyard. Lining the perimeter of the playground were slabs of sandstone rocks stacked on top of each other, and in between them was a little space with a depression that perfectly fit the concavity of my five-year-old butt. Whenever things got too heated at home, I would sneak off, crawl through the thick bushes and arrive at my ‘spot’ to have a moment of peace and silence.

Then there was Griffith Woods. If I drove out a little from my house down the highway, took a left, and then made my way past the houses of Discovery Ridge, I would arrive at Griffith Woods. After parking my car and walking along the concrete path, I would turn left into the bushes that would lead me to a grand view of the Elbow River, rushing past me, and the Rocky Mountains, standing far away in their silent magnificence.

Making my way along the river due north, I would eventually enter Tsu-Tina Reserve – unregulated, unsupervised and remote land fit for the pubescent seventeen-year-old boy I was. I’d have nights of bonfires, s’mores and ‘tests of manliness’ with my friends. There was one time where we randomly met a gang of hoodlums – friendly hoodlums, that challenged my friends and I to one of those tests. Being young and brash, we agreed. We followed them to their ‘base’, where there lay rest a tree trunk probably eight metres long. Essentially, the game was to see who could throw the massive tree trunk farthest in the water. I almost died because I thought I could throw this trunk like a javelin and I ended not being as strong as I thought. The tail end of the tree trunk would have clipped my head into the ground if I hadn’t ducked down at the last moment!

Then there was Sun Chiu Kee. Every Sunday afternoon, it would be bustling with families trying to get a seat. The waitress would yell at you asking how many people, and she would scribble a number on the greasiest piece of paper and you’d wait your turn. While waiting, you could quickly scan the restaurant for your ex to avoid or you could turn to your right and see roasted ducks and pork tenderloins hanging and dripping with juices, steaming up the window with their fragrant aroma that just screamed this is the “real deal”. Lots of screaming in Chinese restaurants. Once you get to sit down, you order the crispy pork with rice combo. In five minutes, a plate of crispy pork belly topped on a bed of steamed rice slides in front of you. The crispy pork has the perfect meat-tofat ratio that melts in your mouth right after you hear the satisfying crunch from the crackling skin completed with a balanced out stable note of plain white rice. This was my Sunday every week.

Everybody responds to change differently. It wasn’t my first choice to come to Australia. It wasn’t even my fourth. Who could blame me? I had everything in Canada. I had my little ‘spots’, a solid group of friends, my family, and a stable girlfriend. But in the end, Australia turned out to be the best option if I wanted to move on with my life. And I really struggled with that. Moving on, that is. I didn’t want to move on. I wanted to hold on to the times at the river, eat the crispy pork and rice every Sunday, and take evening walks through that playground with my girlfriend.

And for a time, I was lost. I hated feeling lost. I wanted to be in control. So, when I landed here, I took control of my life and fully threw myself into change. My girlfriend and I parted ways, I made new friends, studied hard, partied hard – the works. It was fun. But eventually, the novelty faded and I was left in my room, utterly depressed and utterly alone. I took a hard look at my life and I felt so hollow. Sydney was not Calgary.

I describe this period as quite dark and unsavoury, but in retrospect I think it was necessary. I think there is this stigma with being lost. There is always a voice, whether it stems from societal, familial, or personal expectations to always know who you are and where you are going. But in a sense, it is that voice that limits growth. Because the only thing worse than not knowing where to go, is pretending like you know where to go.

I can never replace the things that make Calgary my home. I can never turn back time to choose to stay in Calgary. I can never fight the feeling of being lost, stranded on this island infested with poisonous spiders and drop bears. But what I can do is lean into it. Lean into the discomfort. Because when the party’s over and the dust settles, there will be times where you will feel so alone it hurts, and the worst thing you could do is suppress how you genuinely feel, and by extension, who you genuinely are.

I have come to realise that studying abroad is more than just earning a degree or exploring a new place – it’s about learning to be alone. You probably have the same types of places back home like me – the place where you felt truly at peace, the place where you spent time being stupid, and the place that brought your loved ones together every week. Keep these places in your heart as I have, but be willing to let go so that you can give yourself the chance to let the people and places in Sydney pleasantly surprise you as to how much of a home it can be.